Find out about news, analysis, trends in financial markets and potential opportunities. Arise Academy uses its collective knowledge to show you the most relevant information of the moment.

Risks constitute a major portion of every business, industry, market, even people, and it is a duty to be aware of their unpleasant power and fight against them. Systemic and systematic risks damage in similar manners, but they differentiate themselves with the target they attempt to harm. Furthermore, you will know the dissimilarity between these undesirable threats.

Systemic risk is defined as the collapse or failure of a company, industry, financial institution, or a whole economy. This financial risk represents the possibility that one or these four constitutions experience a triggering event that could cause severe instability until it reaches an important crumbling.

This term ‘systemic risk’ is used to describe small and particular issues as bank account or website user information security flaws. However, it was previously used to identify a specific health-related issue that affected a person’s entire body. As the similarities were identical, the financial universe borrowed these terms to explain how a small business can impact the economy or financial system in such dangerous ways. 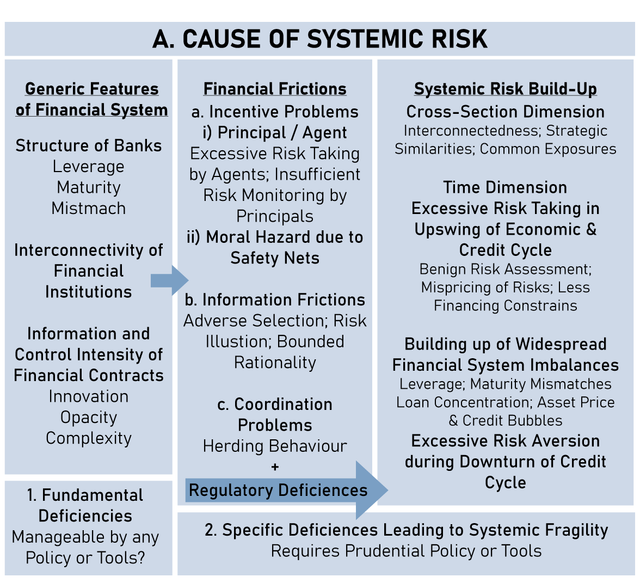 Generally, investors are conscious that systemic risk is difficult to avoid within businesses, therefore learning to know what seeds systemic risk is essential if you were to start a business. These are some of the causes of the systemic risk 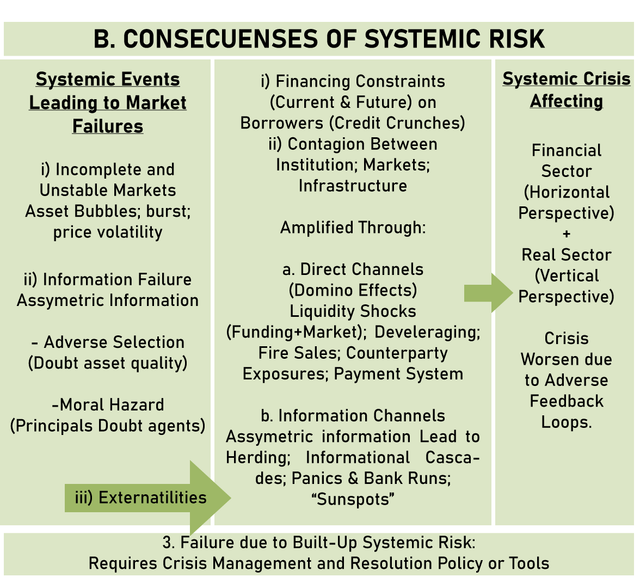 It is well known how damaging systemic risk can be to the industries, and it is important to plan strategic financial moves to avoid failure or collapse. These are some of the consequences of systemic risk:

After the effects resulting from systemic risk, there are high probabilities of an economy collapsing. As difficult as it seems to control systemic risk, financial regulators began to focus on making the banking systems less vulnerable to economic shocks in order to lower their concerns.

Regulators have created firewalls to prevent damage from systemic risk, and also developed microeconomic and macroeconomic policies emphasizing prudential regulation, placing safeguards for the stability of the financial system.

It exist a variety of examples of systemic risk being recessions the most common. In 2010, The Dodd-Frank act took place setting new laws to potentially prevent another Great Recession from occurring by regulating carefully key financial institutions to limit systemic risk.

A systematic risk is called a ‘market risk’, ‘non-diversifiable risk’ or ‘volatility risk’ as it is demanding to control for companies or investors. It affects the overall market which makes the risk unpredictable and impossible to fully avoid it. It cannot be eliminated through diversification, only through hedging or by using the appropriate asset allocation strategy.

Systemic risk arises from market structures which produce shocks or uncertainty faced by all individual in the market. These shocks could arise from government policies, international economic forces, or acts of nature. This type of risk only affects to certain industries and agents which are more likely to be vulnerable towards this situation.

The level of difficulty to reduce or eliminate systematic risk through diversification reaches high in the rank. As a result, assets whose returns are negatively correlated with broader market returns command higher prices than assets not possessing this property.

The idea of managing and eventually avoiding systematic risk lies in investors ensuring that their portfolios include a variety of asset classes (fixed income, cash and real estate, etc), assets that will react differently in the occurring of a massive systemic change.

For instance, in an interest rate rise event, fully elimination of the loss of value in some equities will be possible if ensuring portfolios which incorporate wide income-generating securities.

You must know that both are highly damaging risks for markets and industries.

Systemic risks are defined as events that spark important collapses in a specific industry or economy. Meanwhile, systematic risk is a perpetual market risk that reflects a variety of troublesome factors.

Systemic risk is a fully shock to the system. For instance, the collapse of Lehman Brothers Holdings Inc. back in 2008. Due to the fact that this entity had deeply ingrained within the economy, its collapse resulted in a domino effect that generated a major risk to the global financial system.

On the other hand, systematic risk is an overall, daily and ongoing risk that can be caused by a variety of factors. The Great Recession of the late 2000s formulates a great example of systematic risk. This event affected asset classes in a diversity of ways.

No matter how difficult it might be to avoid any of these risks, it all belongs to the financial environment. People are often confused by these two terms, and they are not to be judged. It is quite confusing at times if knowledge is not enough about these topics. The more you learn how to fight against it, the better results you will obtain.

Learning from the past can help you avoid the mistakes made back in the day.